Wing Point is the beautiful shoreline jutting out to the east you’ll first notice as you arrive on the island. It is a fabulously centrally located community with stunning views of the Seattle skyline and the Puget Sound. The point was where original settlers stopped to watch bald eagles nesting in Eagle Harbor, hence the name. The neighborhood is nestled between Eagle Harbor and Murden Cove, which translates to abundant natural beauty, and peace and quiet with very little traffic. Adding to the advantages of buying Wing Point real estate, the community is home to the island’s only eighteen-hole golf course, and for those that are not golf enthusiasts, the highly rated Wing Point Country Club has a social membership and a swimming pool the Golf Club is the second oldest course in Washington State.

Legacy waterfront estate property. Breathtaking views of downtown Seattle, Puget Sound, Mount Rainier & The Cascades. Value is primarily in the land, as this is the large...

The database information herein is provided from and copyrighted by the Northwest Multiple Listing Service (NWMLS). NWMLS data may not be reproduced or redistributed and is only for people viewing this site. All information provided is deemed reliable but is not guaranteed and should be independently verified. All properties are subject to prior sale or withdrawal. All rights are reserved by copyright.
Like or Share
Loading likes... 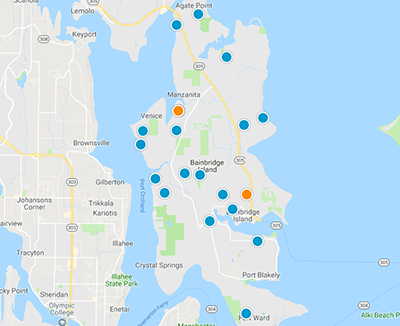